Known as the “jewel of the isles,” owing to the richness of its archaeology, Sanday is one of the most northerly of Orkney’s islands.

And it most certainly deserves it’s name, as home to several long, unspoilt sandy beaches.

An abundance of wildlife, flora and fauna can be found, as well as glittering seas, clear air and spectacular skies.

There are plenty of otters in Sanday (try glimpsing them at Otterswick Bay), although you do have to be patient to find them!

From October, you can even watch the resident grey seals pup from the comfort of your armchair, via the Sanday sealcam at www.sandayranger.org.

Keen ornithologists visit the island in spring and autumn, with the hope of finding a rare migrant and, in recent years, brown shrike, Blyth’s reed warbler, greenish warbler, American golden plover, Swainson’s thrush and many others have been found by visitors and residents of Sanday.

The Sanday Ranger has a year-round programme of events, including guided walks, bird-watching, rock-pooling, citizen science, archaeology tours and other activities, open to all.

Wherever you go in Sanday, the past is always there in some form, from extensive prehistoric landscapes such as Tofts Ness or Spurness, to individual farm mounds — mounds of occupation and blown sand which have built up over millennia.

Sanday Heritage Centre, housed in the old Temperance Hall, contains artefacts dating from the Neolithic through to the late 20th century, as well as a photographic archive, oral history archive, reference library and gift shop.

In the field adjacent to the Heritage Centre lies the Croft, an old but’n’ben house restored by the Heritage Group, where visitors can step back in time into an old croft house, furnished as it would have been around 100 years ago.

A Bronze Age burnt mound is situated in the same field, relocated from the beach at Meur in the North End where it was exposed by storms.

Quoyness Cairn on Elsness is a Maeshowe-type communal tomb dating from the Neolithic, around the early 3rd millennium BC. A popular visitor attraction, those flexible enough to crouch or crawl can enter it along the long, low, occasionally wet and muddy entrance passage, which opens into a high central chamber with six cells leading off it.

In the summertime, visitors will enjoy the Sanday Soulka — a popular and firmly-established tradition in the island’s calendar.

The Soulka weekend festivals attract visitors from near and far, and offer three action-packed themed weekends, each showcasing Sanday’s unique culture and heritage. 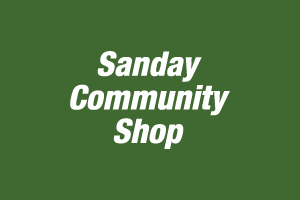